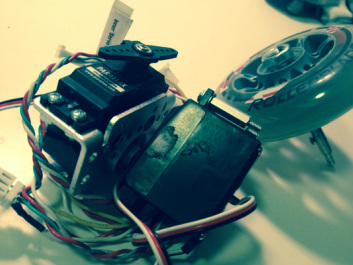 A robot would be a rather boring lump of sensors, chips, and cables if it weren't for actuators. We needed to make our robot hustle back and forth across the playing field, wield a mean lance, and request and shoot nerf balls.

The drive motors were provided to us by the SPDL, and we drove them with Pulse Width Modulation (PWM) in both directions through an  H-Bridge. The fan motor was an electric ducted fan from an RC jet which, since we were only interested in one direction, was driven with a power MOSFET. Two servos were used to control the lance, providing smooth 2 Degree of Freedom (DOF) motion. A third servo controlled the revolver mechanism for loading and unloading balls. Ball requests were handled by a series of IR LEDs triggered by a single MOSFET.

The Servos (Lance and Revolver)